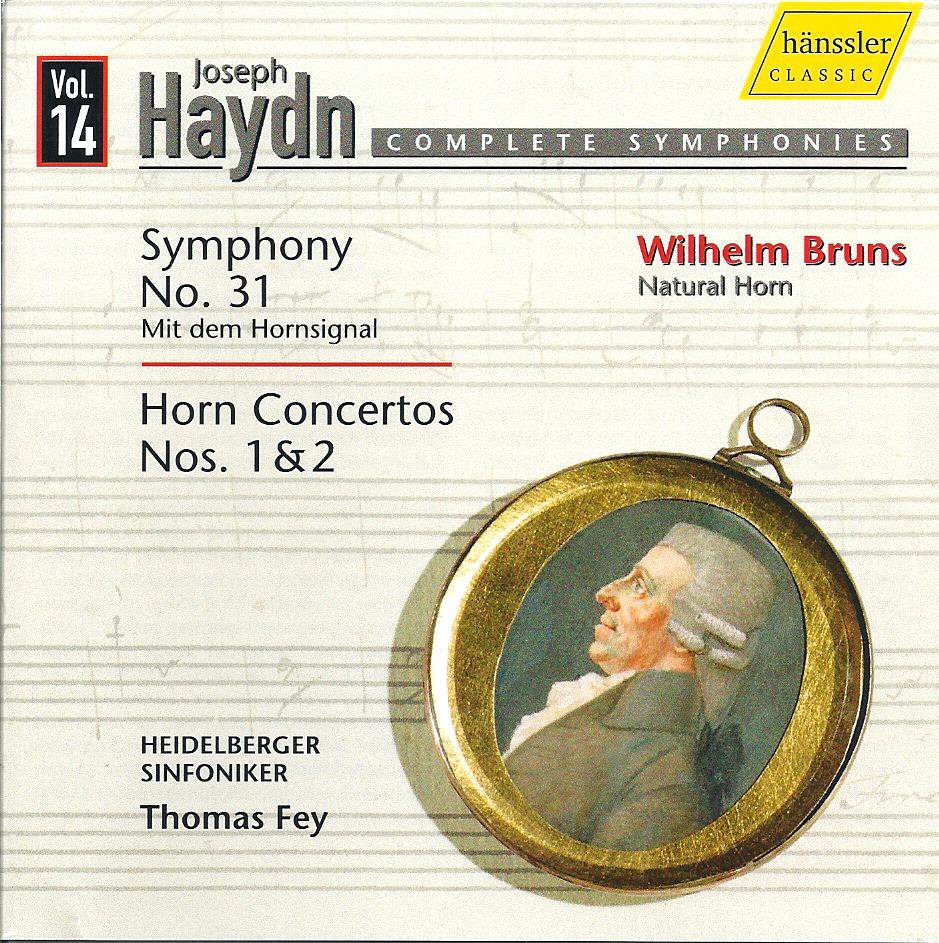 Joseph Haydn. Symphony No. 31 (“Mit dem Hornsignal”); Horn Concertos nos. 1 & 2.
Wilhelm Bruns, natural horn; Heidelberger Sinfoniker, Thomas Fey, conductor.
Hänssler Classic CD 98.611 Recorded 2008.
Bohemian hornists in the middle of the eighteenth century were central in the establishment of the horn as a concert instrument with and within the orchestra. The appointment of the Bohemian hornist, Thaddäus Steinmüller, to the Esterhazy court ensemble in 1762 ushered in a period of significant horn writing from the bright light of the Esterhazy musical establishment, Joseph Haydn, then vice-Kapellmeister. In response to the new availability of so accomplished a player, Haydn composed the Horn Concerto, no. 1 (Hob VIId: 3) in 1762, and a few years later, he saluted the full complement of horns at his disposal in the Symphony 31 (Hob I 31), the “Hornsignal,” replete with four horn parts, often center stage. The later Horn Concerto, no. 2 (Hob VIId:4) from 1781 is dubious in its attribution to Haydn, and a generally less interesting work, in any event. These three works appear together in a recent installment of the complete Haydn symphonies series from Hänssler, highlighting the solo natural horn playing of Wilhelm Bruns.
Bruns is impressive in his confident execution, sureness in extreme registers, both high and low, and technical command. And that technical command leads to some creative touches, as well, such as the multiphonic chords that appear in two of the cadenzas. He is at his most musical in the slow movements of the concertos, with well-controlled lyric lines. In a few instances in the fast movements the playing seems heavy on athleticism and light on grace, with a strongly hammering articulation the most obvious manifestation. To some the result will doubtlessly seem exuberant; to others it will seem overly aggressive. Given the horn’s topical associations with the out-of-doors and especially the hunt, it is easy to imagine the interpretative challenge of knowing how much of the open-air style to bring indoors; here, Bruns frequently opts for the excitement of the horn’s more robust nature, but one might wonder if a less stentorian approach might not have been equally engaging.
The most memorable parts of the recording are the symphony’s “Adagio” and “Finale.” The adagio is beautifully elegant, with finely controlled horn playing in dialogue with a notably nimble and fleet solo violin. The “Finale” is a set of theme and variations, offering an engaging sense of inventiveness and charm in ample quantities. The individual variations are marked by colorful shifts in the concertante orchestration with paired oboes, solo cello, solo violin, solo flute, horn quartet and unexpectedly even the double bass all on display. The horn passages, on their own or with the oboes, are satisfyingly congenial, indeed, underscoring the range of possibilities in the horn’s transition from its iconic past to its more lyrical future.
-- Steven Plank