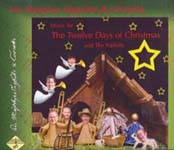 Just in time to celebrate its 25th year of existence, His Majestys Sagbutts & Cornetts has released a new CD album of music for the Christmas season, titled Music for The Twelve Days of Christmas and The Nativity. This group of two cornetts, three sackbuts, and chamber organ often joins with other musicians; in this case they have added Stephen Henderson on percussion, Keith McGowan on bagpipes and recorder, and soprano Faye Newton.

Included here are selections in many musical styles, all originally used as part of the European Christmas season from the 12th through 17th centuries. The album begins with 10 tracks relating to the Nativity, followed by another 13 tracks of what the group calls its “whistle stop tour” of each of the 12 days of Christmas.

In the Nativity section, the first track is Anthony Holborne’s galliard As It Fell On a Holie Eve, followed by the visit of the angel to the Virgin Mary as illustrated by the sung Angelus ad Virginem and Jacob Obrecht’s Ave Maria Stella. The angel appears to the shepherds accompanied by an instrumental medley comprised of Holborne’s The Night Watch and Dowland’s A Shepherd in Shade, after which Newton sings one setting of Von Himmel Hoch, with the brass returning the favor with two more settings by Eccard and Schein. The birth pageant begins with Victoria’s Alma Redemptoris Mater à 5 plus soprano and Walther’s setting of Joseph lieber, Joseph mein. There follows a medley of Es ist ein Ros entsprungen in its version by Praetorius, the Melchior Velpius Canon à 4, and the traditional Coventry Carol. The set concludes with Victoria’s Quem vidistis pastores à 6 describing the arrival of the shepherds.

Reaching Christmastide, the selections follow the subjects of the titular song’s twelve gifts. Thomas Ravenscroft’s Hawking for the Partridge is an obvious choice, as is Morley’s Fantasia à 2 La Tortorella if you know that ‘tortorella’ is a little turtle dove. In the same vein the three French hens appear as ‘t Han en ‘t Henne Gekray à 3 and Le Ballet des Cocqs by Praetorius, and four calling birds are in the guise of Symphonia à 4 Supra la Cuc Cuc by Nicolaus a Kempis. At this point one can imagine a mental block worthy of Major General Stanley searching for a difficult rhyme as the group cogitates about a song to go with five gold rings …”Aha! I have it”… and a five-part canon (ahem, ‘round’) ushers forth in the form of Ravenscroft’s Two Rounds in Five Parts. Tripping along comes Lasso’s “Gyri gyri gaga gans” in Audite Nova, which at least has something to do with geese. At this point anyone having breath in them will see Gibbons's The Silver Swan coming a mile away, but sneaking in behind it is the unexpected Suono del Ballo de Cigni by Giacomo Spiardo. John Playford helpfully provides The Milke-maid’s Life and The Milkmaid’s Bob, but one has to perhaps play the track eight times to get the whole effect. Nine ladies dancing justifies Richard Allison’s The Lady Frances Sidney’s Almayne, and one good rationalization deserves another, so Farnaby’s The Lord Souches Maske follows; the energetic character of this piece along with the mirth inducing sound of the rhythmic rommel pot combine to affect some real leaping (but I’m not kidding, listen as the group cracks up at the end of this track…that’s one hilarious friction drum line). Enter the guest bagpiper to follow Morley’s Those That Want To My Pipes Sound with a suitable traditional Welsh folk tune Nos Galan (which provided the melody of today’s favorite "Deck the Hall With Boughs of Holly"), segueing into the closing Bransle l’Officiel of Thoinot Arbeau (which gave us "Ding Dong Merrily on High"), performed here with lots of percussion, although there are not 12 of them drumming.

This is a fine, and fun, addition to the early brass recording canon. The playing is expert and musical, varying from tear-inducing to energetic, and Faye Newton has a nice, clear, early-music type of voice which both blends with the brass, yet rises above them when needed. Of the group’s nearly 20 albums, this has quickly become one of my favorites.