Selections from the Musicalische Gespräche (1655-56), by Andreas Hammerschmidt 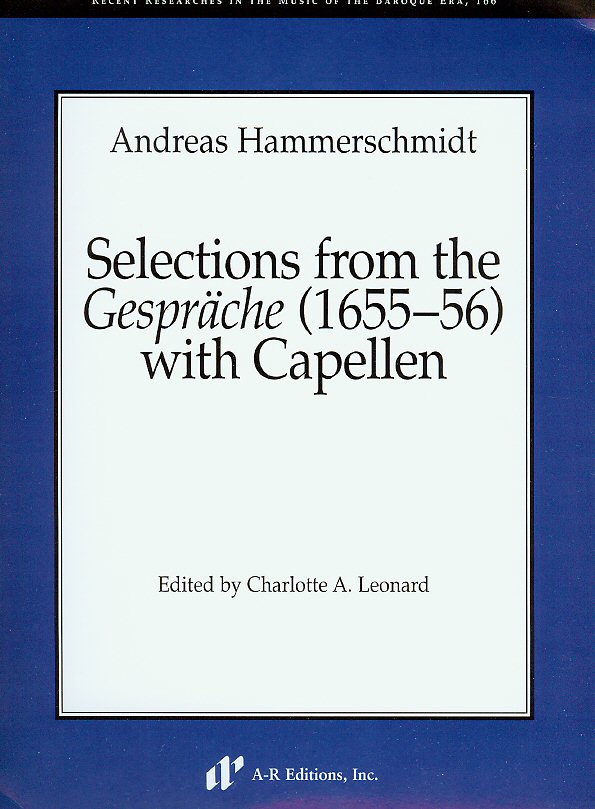 Charlotte Leonard is no stranger to HBS readers; participants in past Early Brass Festivals will recall her tireless work as the facilitator of reading sessions of choral and instrumental works, mostly from the Lutheran tradition. The pieces in the present volume of A-R Edition’s well-known “Recent Researches of the Baroque Era” series are selected from two important collections by Andreas Hammerschmidt: Musicalische Gespräche über die Evangelia (musical conversations about the gospels) of 1655 and Ander Theil Geistlicher Gespräche über die Evangelia (second part of the sacred conversations about the gospels) of 1656. Of the eight works from these two sources, most include cornetti, trombones, choir, and basso continuo. Several others include strings, and other winds such as clarino trumpets and recorders. The possibility for the substitution of other instruments, especially basso continuo instruments, makes for a flexible instrumentation that one can select from to realize performances of this repertoire. The originals, published in part books, survive as a complete set in Dresden (Sächsische Landesbibliothek – Staats- und Universitätsbibliothek, Musikabteilung, Mus Gri 39, 1 & 2). There are sets in other locations as well. The works were chosen to reflect the diversity of different dialogs and instrumentations used in the Gespräche and to show “the various ways in which capellen were created to supplement and enlarge German Lutheran vocal works during the seventeenth century” (page 163). Hammerschmidt’s contemporary, Michael Büttner as well as his copyists created extra vocal and instrumental parts to add to compositions of this type. This volume is the first to combine Hammerschmidt’s music with Büttners additions. This was a common practice and encouraged by Hammerschmidt himself. The Büttner material (refered to as the Bohn collection) is housed at Staatsbibliothek zu Berlin – Presßischer Kulturbesitz. Büttner added instrumental sinfonias as preludes and interludes, reinforced and doubled voices (colla parte) and rewrote pieces to turn them into polychoral works.

Leonard provides a thoughtful and organized commentary on Hammerschmidt and how these compositions fit into the liturgical cycles of the Lutheran liturgy. Lutheran cycles are about the weekly gospel readings that drive the order of worship from day to day, week to week and year to year. Following the gospel reading, appropriate music reflected the gospel message and provided a meditation on and reinforcement of that message. Leonard discusses the history of the use of these musical dialogues and offers a detailed analysis of their context and musical style. Each of the eight selections is discussed with relation to its position in the liturgical cycle noted. There are detailed notes on the performance practice including discussion of instrumentation, the cappella, articulation, pronunciation and ornamentation, organ tablature and an appendix that provides tables that show the piece’s place in the liturgical year, the extent of the original instrumentation by Hammerschmidt and the number of parts that were added by Büttner and his circle. There are translations of the texts and six full-page facsimile plates as well as extensive documentation with detailed footnotes. In short, this is a critical edition of the highest quality. The historical commentary and plates take the first thirty-eight pages of the volume with another eight pages devoted to a critical report that outlines source material and other sources and editorial methods. A-R Editions informed me that sets of parts are not yet available for this music, but that parts can be extracted from the score with adequate notice, with the cost varying by size and venue.

The music itself is appealing and dynamic in the concertato style. In other words, there are small elite soloistic forces known as favoriten pitted against larger ripieno forces known as the cappellen. Formidable tutti effects are created when all the forces unite on important stretches of text or particularly dramatic moments. As Leonard points out, Hammerschmidt was second only to Heinrich Schütz as the most important German composer of the seventeenth century. He emphasized the clarity of the text in these works even with rather large ensemble forces. The music is written in such a way that the text prevails as the first compositional priority. For example, in the first selection, Freue dich, du Tochter Zion (Rejoice, Daughter of Zion) there is a capellen of cornetto and four trombones who largely double the voices of the capellen. The tessitura of the capellen instrument forces are therefore the same as the voices of that group and are quite manageable and vocal in style. The favoriten group requires two soloistic cornetti (or violins) and they act as a type of fanfare-like descant above the vocal forces of the SATB vocal ensemble of the favoriten. These cornetto parts stay in the upper register and go up to the occasional high C. The writing for these cornetti are more idiomatically instrumental in character. Naturally, a basso continuo group unites the entire structure. This selection is appropriate for the first Sunday in Advent (four Sundays before Christmas). It reflects the joy and anticipation of the coming season and particular emphasis is give to the portion of the text that proclaims “Hosanna to the Son of David! Praise be to he who comes in the name of the Lord! Hosanna in the highest!” Unison rhythms set syllabically leave no doubt about the importance of those words.
Other pieces in the collection vary the instrumental forces and give us a feeling for the wide variety of possibilities that are possible with this genre.

I once asked a veteran early music ensemble director what he would do if he had to start a collegium musicum or early music ensemble from scratch. Without hesitation, he said that he would put together a good choir with a cornett and sackbut ensemble and perform the colla parte repertoire to give the instrumentalists a sense of style. I think that this was exactly the type of repertoire he had in mind. The selections work as church or concert music or with modern or period instruments. There is a great amount of flexibility in what the conductor can do with instrumentation and that consequently makes the repertoire very useful to the changing personnel in college, civic and church ensembles. Brava to Charlotte Leonard for making this beautiful music available to a wider audience once again.